On June 25, 1950, North Korean forces attacked South Korea in an attempt to reunify the country.

Though thousands of women served in the Army Nurse Corps at the time, over 2000 of them in the Pacific region, only one, Captain Viola McConnell happened to be in Korea on June 25. She had remained at Camp Sobinggo, near Seoul, working at its dispensary and advising the newly created Korean Army Nurse Corps.

Captain McConnell took responsibility for more than 600 evacuees , accompanying them from Seoul to Japan on board a Norwegian freighter.  She returned to Korea and worked with the 24th Infantry Division, caring for and helping evacuate its wounded soldiers. McConnell was later awarded the Bronze Star for these actions, including an Oak Leaf Cluster for her work with the American nationals she assisted on their way to Japan.

Fifty-seven nurses arrived in Pusan on July 5, and they established first aid stations and hospitals. Within days, some were assigned to MASH units, bringing them closer to combat areas. Before the end of that first summer of the war, over 100 army nurses were serving in Korea. They accompanied the troops that landed at Inchon in September, and they advanced and retreated from the Yalu. Below is Captain Sylvia Pavolvich with the 8209th MASH. 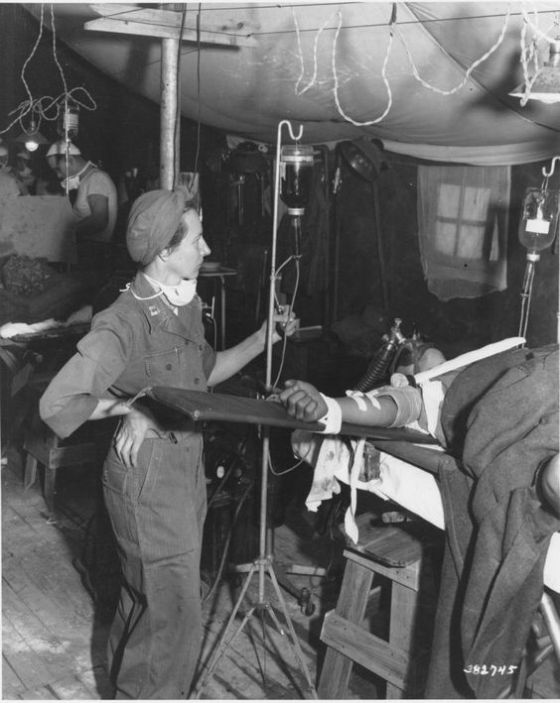 Air force and navy nurses also served in Korea. By the time the war ended with an armistice in 1953, sixteen nurses had lost their lives.