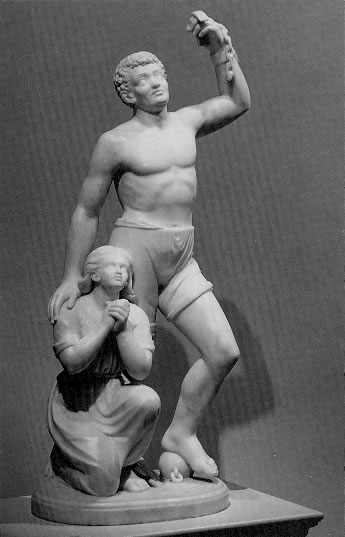 In 1867, two years after the end of the American Civil War, Edmonia Lewis completed “Forever Free,” designed to commemorate the ratification of the 13th Amendment, which ended slavery. Today, the sculpture can be viewed at The Howard University Gallery of Art in Washington, D.C.

Lewis, who described herself as a “Spinster and Sculptor” in her will, led a remarkable life. She was born in upstate New York in the mid-1840s. Her father was a free African American and her mother was from the Ojibwe tribe. Both of Lewis’s parents died when she was young so she was raised by her mother’s people, who called her Wildfire.

She enrolled in Oberlin College in 1859, now using the name Mary Edmonia Lewis. Her time there was difficult. After being accused of poisoning two students and stealing art supplies, Lewis failed to graduate.

In 1863, Edmonia Lewis moved to Boston where she met William Lloyd Garrison. The noted abolitionist was so impressed with her artistic ambitions that he found a sculptor willing to mentor her. A bust she sculpted of Robert Gould Shaw, commander of the all-black 54th Massachusetts Infantry, sold well enough for her to travel to Rome where she flourished within its artistic community.

Scholar Marilyn Richardson has pointed out that Edmonia Lewis skillfully ” emphasized her blackness or her Native American origins. She was very savvy about how to keep her identity in play.” Until the end of the 19th century, Lewis’s neoclassical sculptures were very popular. Then they weren’t. Edmonia Lewis died in obscurity in London in 1907. Most of her sculptures have not survived. Lewis’s own story was almost lost to history.

One thought on “Edmonia Lewis: Spinster and Sculptor”