Since I’ve met my revision deadline (still recovering from that), I’ve been awash in historical images, busily pulling together the ones that will be included in the book. That’s not as easy as it sounds, between jpeg, tiff, pixel counts, dpi, not to mention tracking down copyright holders and securing the proper permissions. If it wasn’t for all that, Angels of the Underground would be lavishly illustrated with dozens of great photos and maps I’ve collected over the years I’ve spent researching the book. 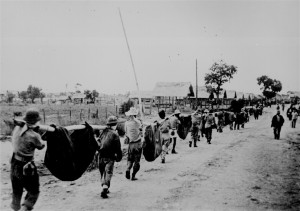 Instead, it will be sufficiently illustrated with about 20 great images. Several of them are public domain, and a few I actually had to pay to secure the rights. But two were provided by an extended family member of one of the Angels in my book. Right now, those two photos really bring the whole story alive again. I can’t post them here (they’re for the book only), but one of them in particular really reminded me of how those Angels‘ lives changed so dramatically when the Japanese attacked Manila in 1941. Peggy Utinsky, who had been living in the Philippines since the 1920s, traveled to the U.S. for a vacation in the summer of 1940. During a visit with her husband’s relatives, a photo was snapped, preserving a beaming Peggy, happy and carefree. Later that year she returned to her husband in the Philippines. The next year the Japanese attacked, and Peggy’s smile never looked the same again.

2 thoughts on “Awash with Historical Images”