This is how 1941 drew to a close in Manila, the capital city of the Philippines: 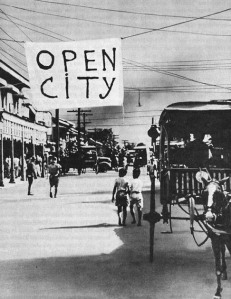 The Japanese had been bombing the Philippines since December 8, a prelude to invasion. When it became clear enemy forces could not be held off, General Douglas MacArthur, head of the United States Army Forces Far East, declared Manila an open city to spare it from total destruction. After Christmas 1941, civilians in the city, including the four women at the heart of my forthcoming book, Angels of the Underground, braced for an enemy occupation. Each one of these women had to decide what she would do when the Japanese marched into Manila. Their stories are dramatic, surprising, and, at times, heart breaking.