For a brief moment–actually for one minute, fifty-two seconds–I was excited about the Netflix series Godless. The trailer is a stunner.

A western town run by the women who lost their menfolk in a mining accident. Merritt Wever (from the twitchy Nurse Jackie) and Michelle Dockery (from the British show that everyone but me was so wild about) as complicated, headstrong women who are very handy with weapons. They need to be, because something even worse is about to happen to their town. 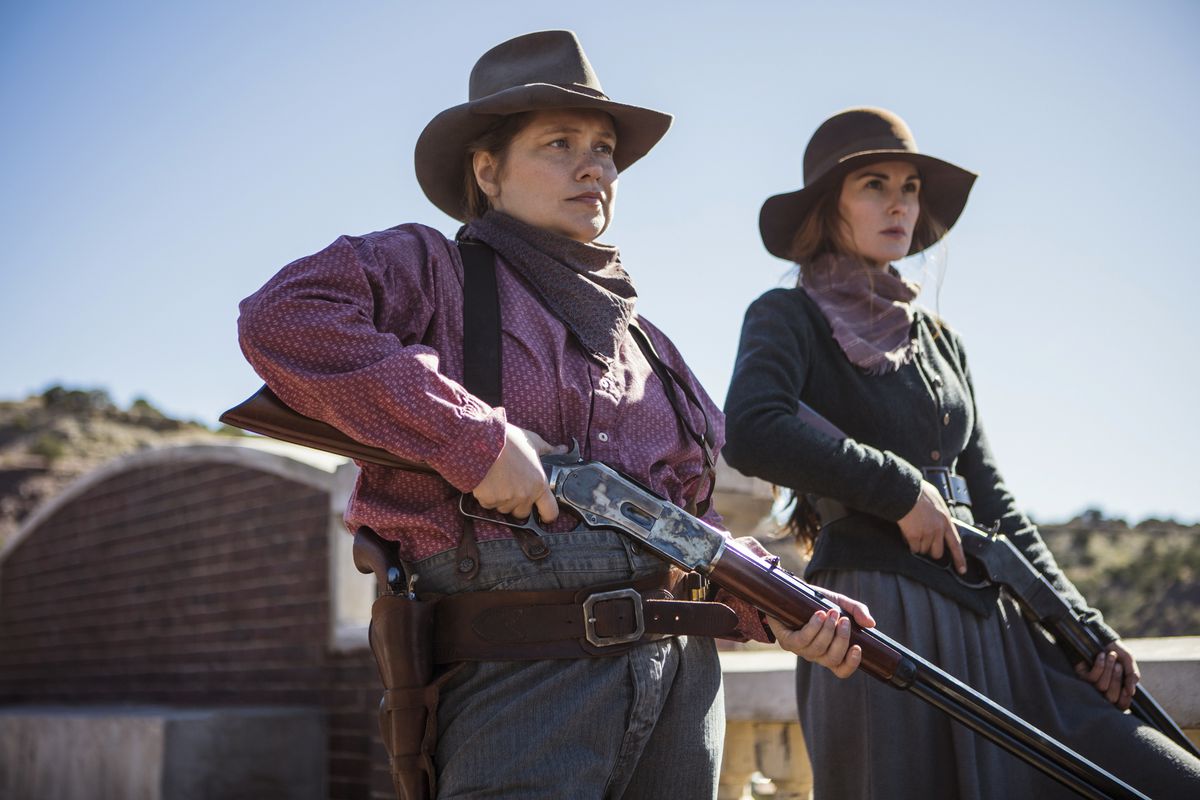 After watching the trailer, I couldn’t wait until the series dropped so I could find out what happened in that small mining town of La Belle.

Opening the first episode: men. Not a backstory of the husbands, fathers, and brothers who died in the accident, but the real focus of writer and director Scott Frank’s story–the ruthless, deeply flawed, yet somehow still relatable villain Frank Griffin (wonderfully acted by Jeff Daniels) being hunted down by good guy sheriff and grieving widower Bill McNue (wonderfully acted by Scoot McNairy).

Griffin is in a lather because a member of his posse, Roy Goode (Jack O’Connell, who delivers a fine acting job, too), has gone rogue by going good. Goode doesn’t want to be part of the outlaw gang anymore, but to Griffin it isn’t a gang. It’s family. He took Goode in when he was a little boy and raised him right to rob and kill. Griffin doesn’t want his family broken up, so he tracks down Goode, destroying everything and everyone who gets in his way. McNue tries to minimize the damage and bring Griffin to justice.

So that whole bit about women running their own town–it’s backdrop. It’s window dressing for the story Scott Frank wants to tell. And it’s a tired, tired story.

The deeply flawed bad guy with his own (twisted) version of family. That’s already been done in The Sopranos, Sons of Anarchy, and Mad Men.* And before that in The Godfather. A version of the good guy sheriff shows up in every western. Yes, McNue is dealing with losing his eyesight as well as grieving for his wife, but John Wayne’s character in The Shootist coped with terminal cancer.

Godless‘s most interesting characters–the women–are glossed over. Wever’s Mary Agnes, once happily married to a man, is now besotted by the town prostitute turned schoolteacher. Two fascinating characters right there; three if you add the German immigrant painter who ran away from her husband and who also spends a lot of time with the schoolteacher.

The intriguing possibilities for Dockery’s Alice Fletcher–twice widowed, living on an isolated ranch with her Native American mother-in-law and her son–get reduced to the standard love interest. Guess where Roy Goode ends up after fleeing Griffin’s gang? Guess who Sheriff McNue secretly loves?

In the end, I wasn’t surprised that I was disappointed in Godless. Movies and television are still dominated by men. They aren’t interested in telling women’s stories. Even when those stories are right in front of them.**

The unsurprising disappointment of Godless is one reason why more women writers, directors, and producers are needed for movies and television series. Maybe they would see the possibilities.

*Yes, I consider Don Draper a villain. More than anything, I would like to have that entire Mad Men series re-edited to highlight Joan’s and Peggy’s story lines. Now that would be something unique.

**I love westerns, and I’d be up for a second series of Godless if it really was about the women.

3 thoughts on “The Unsurprising Disappointment of “Godless””